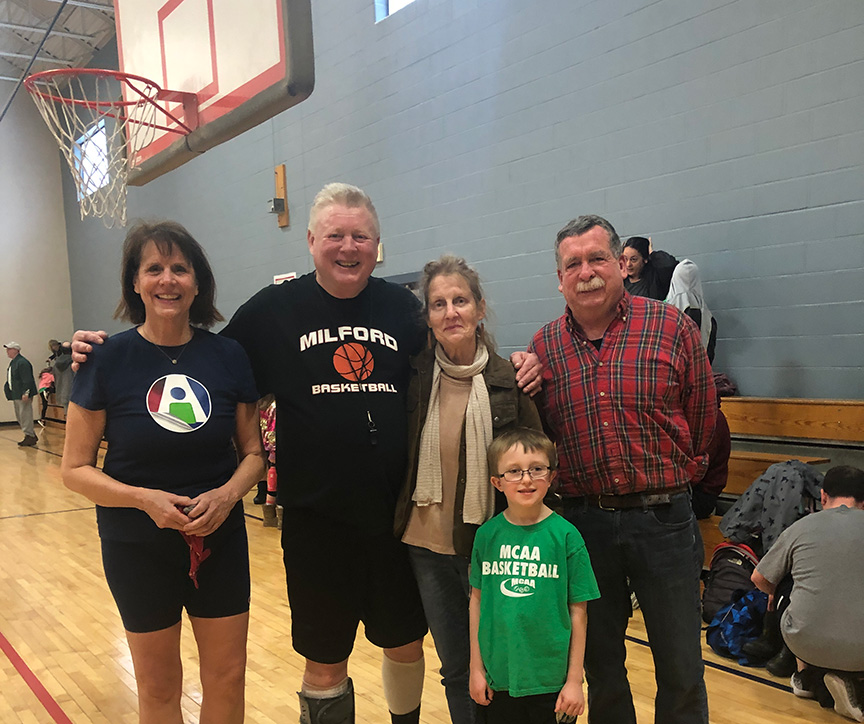 Photo: At Milford elementary school basketball with Danny and our classmates Christina and Ed Medlyn and their terrific grandson.

After Dan Murray died in February, my brother Hondo sent me a message saying that the Monadnock Ledger Transcript was looking for people to talk about the impact Dan had in the community. I wrote this little essay too late for the newspaper’s deadline. In the days following the shock of Danny’s death, I had the idea of putting a few pictures together with the song “Danny Boy,” and thought I’d give myself until St. Patrick’s Day because I was just too sad in February.

I texted Danny on January 23 to see how he was doing and see what was going on with youth basketball amid Covid restrictions. He had given me a Milford Do BATTLE shirt the year before and I thanked him. He wrote back:

I will always be amused that the last time I heard from Dan personally he reported the joy of beating Amherst (my home town) because the Souhegan/Milford rivalry is real. And even though I love my hometown, I am glad when Milford fights and wins.

So here’s the little movie “Danny Boy,” you’ll see there is a lot of room to add more pictures if you have some. And the essay follows.

Thank you Dan, Jenni, Lucy, Sheila and Cindy for all the fun times at China Star after the games. Thank you Danny for Saturday mornings with the kids, and of course, for getting us back in the gym to remember our Milford basketball roots.

In recent years, a few of us have been going to the Milford games to watch Danny coach and cheer on his teams, joining parents and others at the China Star for post-game fun and commentary.

One evening, Dan mentioned that he had clinics on Saturday mornings for young kids and asked me if I’d like to help. I hadn’t coached basketball since my kids were little and wasn’t sure where my basketball sneakers were, but I joined him too early the following Saturday morning at the Heron Pond School gym where dozens of girls and boys age 5-7 were bouncing their balls (with their names written on them) in what for me was a glimpse of heaven. Children excited about basketball much too early on cold winter mornings seemed like an unlikely fantasy world to me.

The magic was in Coach Dan Murray. He called the kids to center court and with a mixture of stern instructions and cockamamie stories about stealing cookies out of grandma’s cookie jar, he taught them basketball. Although I had played basketball in college, I had not started to play until I was a sophomore in high school, so being surrounded by 5-10 year old girls who had a chance to learn early and grow great was a real gift for me. Dan thought it would be good for the girls to see a female adult demonstrate things and he assumed I was ready to run the court and make layups on the end of a fast break. Something about that confidence he had in me helped me rise above 64 years and two knee replacements of challenge and feel like a kid again myself.

I learned a lot about basketball last winter and only wish I could have had a coach like Dan when I was a lost little kid. The kids responded to him with adoration, as did the parents, and it was clear to me that Dan the Man from the Milford Class of 1973 was truly the king of the court. I am very proud to have known him, and to have had a chance 45+ years after high school to experience the best things about basketball with him.