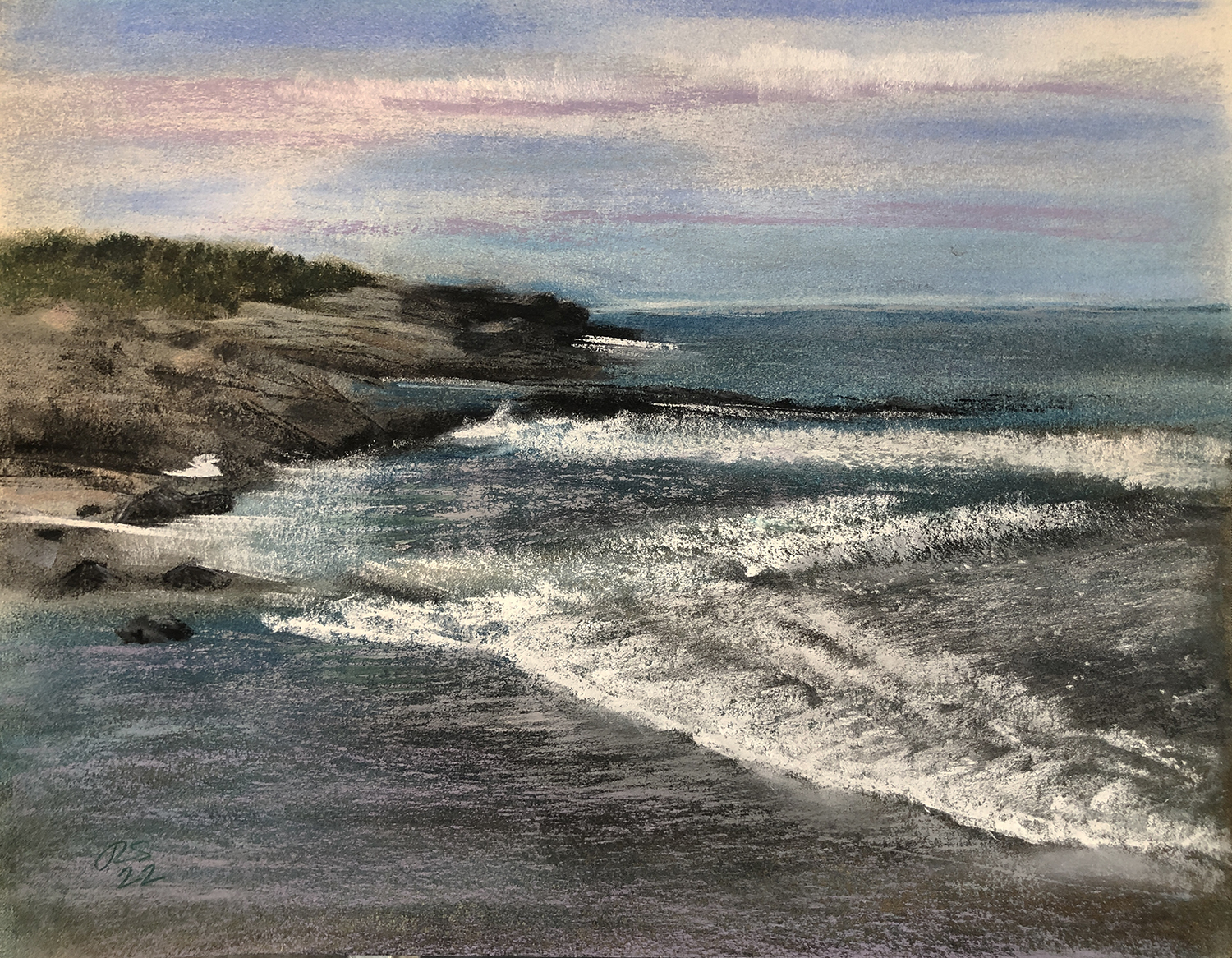 Last week, a small group of us from the Milford High School Class of 1973 got together to start laying the groundwork for our 50th reunion. Yesterday, the news reached me that our high school art teacher, Bill Rapf, had died. Today, I finished, signed and framed a pastel called “Salty Beach.*”

As I was doing the framing, I was thinking about high school, Mr. Rapf, and my basketball coach, Mr. Kelley. In no particular order.

I remembered that Mr. Rapf said I was a waste of talent. Not to me—A classmate told me in the hall after his art class. Who knows if those were the precise words spoken or what the intent was?

But the effect on me is probably the important thing. I believed that Mr. Rapf said that. He said something directly to me that meshed with the theme of my art not being all it should be. When I mounted my senior exhibit in the high school library, I breathlessly awaited the comments from my peers, written on forms and stuffed in the comments envelope. Other students who exhibited before me were disappointed in the quantity and quality of their feedback. My envelope was chubby—full of positive reactions. My art style is accessible—not too abstract or elitist, not too daring. Sort of straightforward, unpretentious, easy to look at. I don’t make the viewer work hard. I think all of that ran contrary to what art teachers like to see. I don’t really know. But when I went running from the library to the art room with my stuffed envelope, Mr. Rapf said, “Did you write all of those?”

This could have been an attempt to calm me down with humor and put my fellow students’ opinions in perspective. Their critiques probably weren’t going to get me into art school.

What he didn’t know—and I am just putting together now—is how important his influence was.

Back to Mr. Kelley for a moment. Mr. Kelley told me I was a star. OK, he said that to people 100 times a day. But once, he told a newspaper reporter that I was the best center in the state. At the time, I thought he was crazy. Since then, I have tried in various ways in various sports, to prove that he was right.

In 1972/73 (50 years ago), my father was leaving our family, eventually leading to my parents’ divorce. It’s obvious to me today that I was recruiting father figures like it was my full-time job. Mr. Kelley stepped in, taught me a sport and wrote me a recommendation that got me into college early decision. I applied to one and only one college.

I majored in art and basketball. Neither worked out according to plan. But I still self-identify as an artist and a basketball player. My business life has been built around being a graphic designer, using my art enthusiasm for good. And I still try to stay in shape to do sprint triathlons, hoping to do my fourth in July.

If you’re still reading this and wonder why I would write critically about a person who just died, hear me now.

I could not be more grateful.